In this guide, you will learn how to complete the Cabin Fever quest in Old School RuneScape. This quest is rated as having a medium length, but as with any quest in runescape gold, you can pick it up and come back later at any point.  The quest begins at Port Phasmatys Inn, which you can easily reach with the Ectophial, fairy ring code ALQ, or via chartering a ship. Do ensure to bring your Ghostspeak Amulet, as you cannot interact with the bankers without it, despite not needing it for this particular quest. 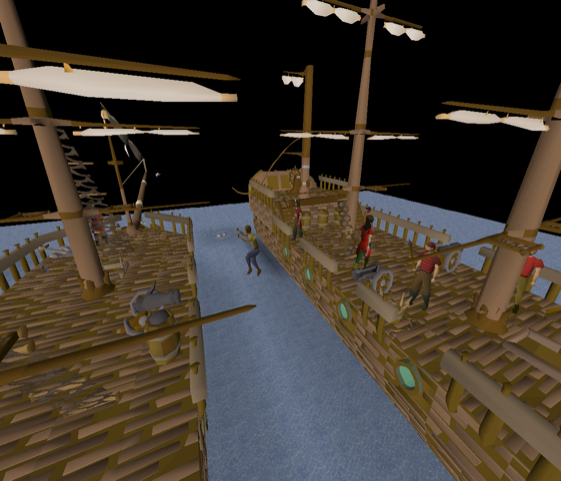 To access this quest, you must have completed Priest in Peril, Pirate’s Treasure and Rum Deal. Rum Deal has a considerable number of prerequisite quests:

In terms of combat, you won’t face much difficulty in Cabin Fever, as you will only have to defeat level 57 Pirates that attack you. However, one of the prerequisite quests is Zogre Flesh Eaters, which has a level 111 boss – and it cannot be safespotted. If you’re able to complete that quest, you should have absolutely no combat difficulties or worries with Cabin Fever.

You must also have level 40 Ranged, 42 Agility, 45 Crafting, and 50 Smithing. You cannot achieve these stats with boosts, but as you’re a member, you can achieve these levels fairly quickly within one evening from scratch. If you don’t quite meet the levels, many quests will provide significant experience in each of those skills, which can be faster than doing low-level experience methods.

Head to the Inn in Port Phasmatys, and speak to Bill Teach, choosing the first dialogue option twice. Then head to the dock and board the ship closest to the east, and again talk to Bill Teach.

At this point, you will cut to a cutscene. Take 4 ropes from the repair locker, 1 fuse from the gun locker, and the tinderbox at the south side. Proceed to climb the ladder to the main deck and use the rope against the hoisted sail. Be aware that you can fail the jump, and it is dependent on your Agility level.

Once you’re aboard the enemy ship, be cautious, as you can be attacked at any time by the aforementioned level 57 Pirates. If you’re ever low on health and need to escape, climb the net.  Use the fuse on the powder barrel (located at the west side) and proceed to light it. If lighting it fails, merely repeat this step until it is successful, similar to the jump. After having done this, head to the climbing net, and use a rope on the hoisted sail back to your ship and talk to Bill once more.

You will notice the enemy’s cannon has done damage to your ship. Head down the ladder, search the repair locker for the following:

You can then repair the leaky holes and report back to Bill.

Next, head back to the enemy ship and down the ladder. Gather 10 plunder by searching the nearby objects, return to your ship. Place the plunder in the chest on the lower layer and talk to Bill.

From the gun locker, grab a cannon barrel, and use it to repair the broken cannon at the top level. Inform Bill it’s been repaired, and gab a ramrod, cannon canisters, and some fuses from the gun locker. Withdraw some cannon powder from the barrel at the cannon, and execute the following in succession:

Report to Bill and repeat the actions from the gun locker onwards. However, instead of cannon canisters, you will now take cannonballs directly. Fire three holes into the pirates’ ship. 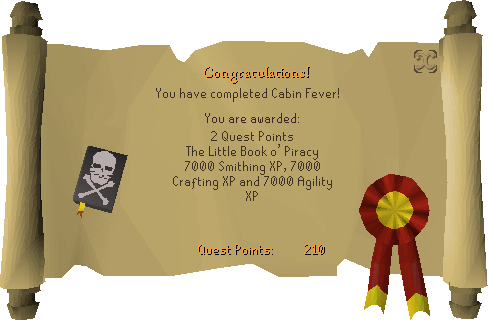 The rewards for this quest are plentiful. However, one thing often forgotten is that there’s an additional hidden award. After the quest has been completed and you return to the port, you can speak to Bill in the pub. Doing this will allow you to receive your fair share of the loot, which is 10,000 gold coins – something that isn’t mentioned within the rewards scroll nor rewarded directly.

Enjoy your 2 quest points, and 7,000 experience in Crafting, Smithing, and Agility. You can now also kill cave horrors, a popular Slayer monster. You also get access to Mos Le’Harmless and can play the minigame Trouble Brewing (which you now unlock) and access Jungle Horrors. Any ship you charter from this point onwards will have the price halved, something that’s very helpful if you’re an Ironman, reliant on this method of travel.

By completing this quest, you’ve also progressed the Morytania Diary and can now have a go at completion The Great Brain Robbery. Best of luck with your osrs gold questing journey!