Web and mobile development has evolved with time. It is no more just about writing pages of HTML and attaching them coherently. With changing times, user tastes and demands have also changed. The new concepts of mobile and web apps require just a single page app, so that a user can just scroll up and down for the entire content of the app without having to tap the screen.

Although this is beneficial for users and app owners, at the same time requires writing a lot of code for app developers. This is where frameworks enter the scenario. These front end JavaScript Frameworks were created to give solace to the harassed souls of developers. Frameworks allow developers to put together a mobile or a web app more efficiently and neatly without the need to write long and cumbersome codes. 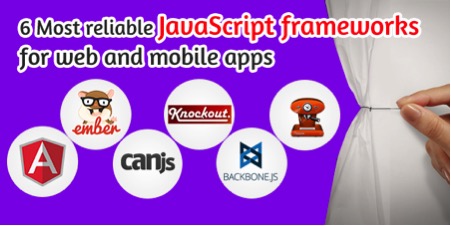 What are frontend JavaScript frameworks?

Web and mobile app development requires teamwork of a designer and a developer. A designer takes care of the frontend part, which decides how the app will actually look. The developer then adds functionality at the back end to make the app work. It often happens that the end results after the completion of backend work look different from the initial expectations. This results in patch work by both the developer and the designer to get it as close as possible to the original idea. This patch work becomes even more complex in single page app designs.

Now, to wrap up things
We are almost done for now. All that I knew has been put down here. But still, like I always say, Knowledge is endless. It never ceases or ends abruptly, but keeps flowing like a stream of clear spring water, enriching and enlightening our minds. So if any one you thinks that there a framework which needs special mention over here, then please drop me a line and I shall be obliged to put it right down here.

Author Bio: Macy Jones works as an app developer at App Xperts, an App development Melbourne based company. She specializes in creating hybrid apps for both the iOS and Android platforms. Know her more through Facebook or Twitter.