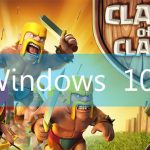 No, Clash of Clans has not been released for Windows yet so gamers who don’t own an Android phone or an iPhone have to either buy of the supported devices or find a way to play the game on their device running Windows 10. Let me tell you, playing Clash of Clans on Windows 10 or Mac isn’t a big deal as there’s an app specially made for emulating Android games on Windows 10. … END_OF_DOCUMENT_TOKEN_TO_BE_REPLACED